← more from
UNDERDOG RECORDS
Get fresh music recommendations delivered to your inbox every Friday.
We've updated our Terms of Use. You can review the changes here. 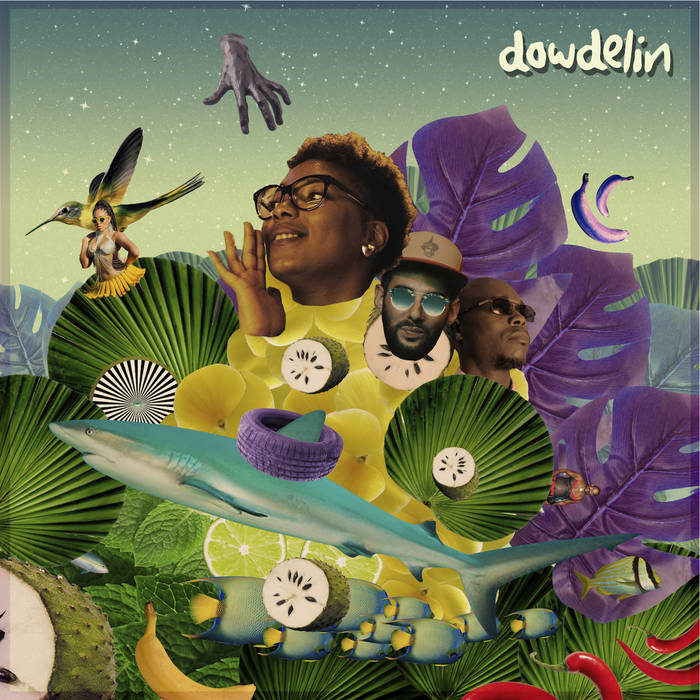 Dowdelin explores as a tireless ever moving trailbazer a path where Creole jazz, electronic dancefloor sounds and Caribbean percussions come together to create a unique Future Kréol feeling.
The Black Atlantic, title of an important work by Paul Gilroy, an English sociologist, states the theory that “there is a hybrid culture, which is neither African, nor American, nor Caribbean, nor British, but all that at the same time: the black Atlantic. ”
It is a world of cultural exchanges and incessant back and forth, where music is key/central. A universe of multiple and reciprocal borrowings that, aesthetically, sticks perfectly to Dowdelin, a Lyon-based trio exploring Afro-futurism in its Creolized form, plunging the traditions of the French West Indies into a great fountain of electronic youth glazed in jazz, in a way that few have so far.

The Dowdelin group is a new iteration of the musical adventures of David Kiledjian aka Dawatile, seasoned musician and producer. lyonnais producer. It is a window opened on the Creole music of today.

As an eternal pioneer, David marks with Dowdelin a new chapter in his fight against frozen categories in music, as showcased with his other projects his projects as well (Armad & Cyme, Plaster Cats, Fowatile, HILA) and his collaborations, including with Tigran Hamasyan, the jazz piano prodigy and custodian of the Armenian cultural heritage.

It all began, or not quite actually, when the singer Olivya contacted David Kiledjian, then in the middle of his Fowatile adventure ( a project of future funk infused with hip-hop well-known by 2.0 groove enthusiasts). It is not yet the moment and Dawatile then doubts the relevance of a group with the soul influences in English, with a non English-speaking singer… But they stay in touch, and a year later, an idea sprung: what if Olivya sang in Creole, her mother tongue, she, who is Martinican? Banco. They spent countless hours glued to the computer together, looking for the right track, trying out gimmicks, exploring threads, grabbing a microphone or an instrument as soon as an idea takes shape.
This is Dowdelin’s genesis: two individuals, constantly exchanging, in a quest for a Creole feeling chiseled by electronics.

Of the art of mixology

Seeking the right dosage then becomes the ultimate quest. In other words, find the surprise ingredient that will enhance the taste, or the subtler one that will only help magnify the whole. In cocktail as in music, the method remains the same.

Dowdelin illustrates this art of blending: the search for the recognizable ancestral flavor in the moment, pairing it with an unusual influence, shaking everything to create the texture that will make the difference. We sometimes think of Max Cilla, the flutist, to Jacques Schwarz-Bart, the saxophonist … but also to the work of the collective Mawimbi on African music.

Being embroidered in the bubbling afro-futuristic scene and confirming the return of Caribbean influences in French pop, Dowdelin becomes a trio when David thinks of an old fellow musician whom he has not met in ages: Raphael Philibert, Guadeloupian poly-instrumentalist omnipresent on the jazz scene (both had played in the same Caribbean jazz band), saxophonist for Sonny Troupé, but also a goldsmith in Afro-Cuban percussions and a tried Gwoka player. He is added to the sketched repertoire : it’s a match!

A large orchestra of three

Dowdelin transcends the exercise of style and complicity with two multi-instrumentalists, who by their experience, versatility and vision, open the field of possibilities to a singer speaking in her native language.

“I knew that with him, if I dropped the bass and the keyboards and he did so with the drums, we would have a brass section while remaining three,” said David. The goal is to remain flexible. Everything is set up to make this patented Dowdelin sound emerge, innovative as well as imbued with the times. The first residences follow (at La Friche Lamartine, Projet Bizarre!), then the first concerts (Jazz in Vienna in particular) which demonstrate from the get-go the relevance of the project.

The group brings to the forefront the notions of expression and freedom in music while steering clear of the fixed roles and the clichés.

Olivya, who’s an instinctive singer, quickly asserts her scenic and vocal ease, mixing languor and power in her singing, the former echoing jazz influences, the latter being the counterpoint to the electronic production of the ensemble that Dawatile, as a seasoned producer, shapes with dexterity.

In the songs, Dowdelin tackles the themes of Afro-Caribbean cultures, in an African-American music genre conveyed in Creole.
A rare linguistic and musical configuration, in the current music in which English is traditionally predominant lyrically-speaking.

Slowdown “, perfectly illustrates perfectly the imaginative side of the Dowdelin project: it is a text inviting to meet, to regroup in the face of all the sollicitations of daily life, while Laissé Mwen, first track of the album, speaks of the refusal of labels that some would like to impose on people and music as well…
This results in a successful musical patchwork, illustrated by the post-modern cover filled with caribbean references, as well as it is by the scenography of the live show which is the result of the collaborative work off Fred Durieu, a developer of algorithms dedicated to art whose work allowed to generate an image on stage in real time and Benjamin Vedrenne who can also be credited as the author of the “cube” by Étienne de Crécy.

No spot in music is immovable. No music can sit still but it’s hardly ver as true as it is for Dowdelin, a band that can’t be tied down to a single
geography and genealogy. The creole language, Caribbean rhythms, urban energies, dazzling virtuosity, sensual electro: The group evolves in a
unique place where genres and colors, heritage and audacity can merge. ... more

Bandcamp Daily  your guide to the world of Bandcamp

Oakland producer Mejiwahn chats about his breezy and transportive LP.